Last week Marble Brewery hosted its first-ever Oktoberfest block party at the 111 location in downtown Albuquerque. VIP ticket holders snaked around the entrance waiting to enter the gated beer lot. Every staff member was decked out in traditional lederhosens and dirndls. And a deluge of beer poured from every spout.

What is Oktoberfest Anyway?

Oktoberfest, originally celebrated in Munich, is now a worldwide celebration of beer culture and, a group of upper-echelon brewers in Albuquerque gave their takes on  German-style beers. According to Justin Hamilton, Co-Owner and Head Brewer at Boxing Bear Brewing Company, Oktoberfest, in addition to being a common folklore of a marriage festival, signifies the beginning of the traditional brewing season in Germany.

“It’s getting cold again, so that means that you’re able to actually make beer in Germany,” Hamilton told Grey Wolf. “During the summertime it was hard to make beer because it would spoil. So what they would do is make beer all winter long and store it in kegs for the rest of summer. So when Oktoberfest came around, all that left over beer from the summer, they’d pull it out and have a big festival to start the new brewing season.”

Most if not all New Mexico breweries are releasing an Oktoberfest beer. As this trend continues to grow, we wondered what flavors to look for in a great Oktoberfest ale.  Hamilton taught us the basics.

Community engagement is a crucial facet in the success of the local brewery scene, especially for Marble. But the fun factor is what makes events like Marblefest draw in the crowds. Hunter Turnbull, Beertender for Marble, agrees.

“The brewing community, especially in New Mexico, is one big family. We have opportunity to grow, to learn, to brew beer together, to share in profit,” Turnbull said. “These sort of events are going to keep people excited. Young, old, happy, sad, as long as people are having fun and enjoying themselves, it’s a success.”

Turnbull said his favorite brews at the event included: Marblefest (a collaboration with several top local breweries), La Cumbre’s Keller Beer and Das Bear – Boxing Beer’s German Pilsner. He explained to us what flavor profiles make a great tasting Oktoberfest for him.

“A big part of it is that we are getting that light, bready, delicious, nutty texture that’s coming from German malt and German hops,” Turbull said.

The Logistics of Planning a Block Party

From the perspective of the public, big brewery events like Marblefest are just a one day party for the community. And yes, they’re so fun! But consider this, it takes a substantial amount of time and planning to properly execute these events. Barbie Gonzales, Director of Taproom Operations for Marble, said it took 6 months to plan Marblefest 2018. She said that after the big 10 year anniversary celebration, which took place around March, the team at Marble got right to work planning Marblefest.

“It’s a very large endeavor and thank God that there’s a great team that works with me,” Gonzales told Grey Wolf. “Every time we do one of these street festivals, we get a lot tighter and a lot smarter about everything we are doing.”

Here are some photos of Marblefest 2018! 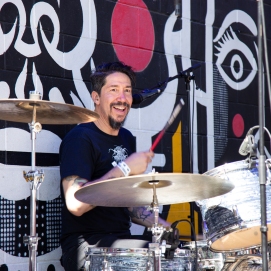 And, some more photos! 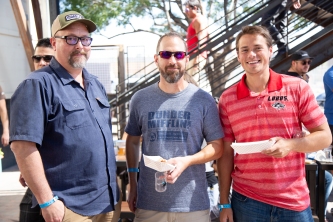 Food trucks galore and fun photo ops, there were many vendors at Marblefest 2018. Mia Garcia owns Elite Entertainment with her husband and they set up a FREE photo-shoot booth with tons of props on the second story balcony of Marble. Garcia said that Elite Entertainment and Marble Brewery have a great business relationship.

“I am so thrilled that Marble repeatedly goes out gets people together, that’s the most important part” Garcia said. “Especially for Albuquerque. There’s so many different niches (of business) and so many different backgrounds and ethnicities here. It’s such a beautiful thing when they all come together.”

Elite Entertainment wasn’t the only husband-wife vendor at Marblefest. Burque Bakehouse, owned by Sarah Ciccotello and her husband Chris, was there serving up delectable pastries. Here are some pictures to drool over.

All photos taken by John Campi. Find him on Instagram @johncampi_photography.

View all posts by greywolfpublications